Making the transition from paper to screen animation is a critical step that can lead to a variety of issues if done incorrectly.

Since many people do not know which software to use as a beginner, they end up paying a hefty price for premium software that they later regret because they find it difficult to learn.

To help you get started, we’ve compiled a list of 7 animation programmes, both free and paid. Out of hundreds, if not thousands, we’ve compiled a useful list that saves you money while also providing value to you in other ways.. 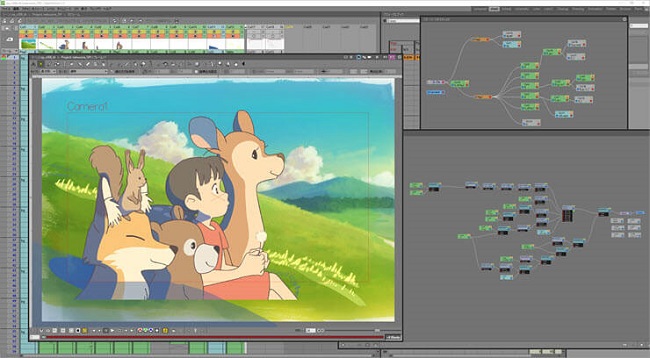 Please keep in mind that no single piece of software can meet all of our needs, and we should select the appropriate software based on our specific requirements. When it comes to software, it doesn’t matter how much you pay or how much you research.

Seven of the Best Animation Programs of 2022

Windows, Mac OS X, and Linux can all run Autodesk Maya. When it comes to this software, it doesn’t matter if you’re a novice or a master. The fact that Autodesk Maya 3D animator is one of Disney’s preferred choices for animation software should come as a surprise to no one.

Autodesk Maya is unquestionably industry standard software, as the vast majority of professionals will attest to. One month of free use is available to those who are new to the software or who are curious to see how it works for themselves.

After the free trial period, people are rarely interested in purchasing additional software. You can choose from a variety of plans, including monthly, yearly, and three-year options. It is available to students at no charge.

It doesn’t matter if you’re working with photos, videos, or animations; Adobe’s products are the best in the business.

As a 2D cartoonist, you’ll benefit greatly from this. Adobe Animate gives you a wide range of options for creating an animation, including frame-by-frame hand-drawn animation and puppet animation.

To avoid having to draw a character repeatedly, consider using puppet animation, which allows you to perform actions on the character with just a few clicks.

Procreate and other similar drawing programmes can be used to import your character. It is part of the Adobe Creative Cloud package, but it can be purchased separately if necessary.

This is yet another example of Adobe’s reputation as a producer of high-quality products. For those who are just starting out, this software is specifically designed to help and is compatible with both Windows and Mac OS.

The software is easy to use and follows these steps: Puppets can be your own creations from Adobe Illustrator, Procreator, or any other programme. Then Adobe uses your camera and microphone to detect the inputs and animates the character in response to those.

Animating a character is as simple as recording your own actions and pasting them into the appropriate places. However, its simplicity is also its lone drawback.

It is only useful if the animation is limited to dialogue and a few hand gestures at the most, as it uses our actions and voice. It’s available as a stand-alone product or as part of a creative cloud bundle.

All levels of animators can use Cinema 4D, which is a three-dimensional i.e. 3D animation software, from the bottom to the top. Although it was originally designed for the Amiga platform, it has since been made available for both Windows and Mac OS users.

Modeling, lighting, texturing, visual effects, and animation are all possible with the software. It has an easy-to-use interface and a layout that can be customised to meet your specific requirements. For a year-long subscription, you’ll pay about $60 per month.

2D animators like Toon Boom Harmony are among the best in the business. Frame-to-frame animation or rig animation can be used to create animation on it.

With its robust and unique tools, it is possible to scan a sketch and enhance or clean it for further animation, even if you prefer hand-drawn graphics for your animations.

Novice users create shows like “Sponge Bob Square Pants,” thanks to the software’s capabilities. This software has countless applications.

Anyone who uses it for the first time becomes smitten with it and never wants to stop. A few notable examples include ‘Sponge Bob Square Pant,’ from a major motion picture production company.

The software is compatible with Windows, Mac OS X, and Linux, and there are three pricing options. A month’s worth of service costs as little as $25.

As a matter of fact, this is a complex and advanced animation software. Houdini is best suited for people who have some experience with animation software, as it can be difficult for newcomers to learn how to use it.

Once you’ve gotten the hang of it and are comfortable with it, you can use it on a professional level.Houdini was proudly used in the animation of blockbuster films like “Frozen” and “Zootopia.”

Houdini has a feature called procedural workflow that can be used to generate animations in real time. To animate highly dynamic objects like smoke, clothing, and fire at a more advanced level is possible with this feature.

The end result of this feature is a realistic animation that depicts how a thing works in real life almost as accurately as is possible to do.

Additional Houdini features include a Nodes-based workflow. This feature enables users to save each action on a separate node, allowing the nodes to be easily rearranged during final production.

Even with so many features, it’s not as complicated as you might think. Students and others using it for non-commercial purposes can use it for free if they don’t want to purchase a premium package.

If you’re a novice artist, Pencil 2D is a great tool to get started with. To create hand-drawn animated scenes, you can use this software, which is more basic or traditional. As an open-source platform, Pencil 2D allows anyone to contribute to its development.

In terms of animation, this is one of the best free tools out there. Using this, you can seamlessly switch between roaster (bitmap) and vector workflows, and you can add infinitely many layers to your designs.

You’ll be able to better concentrate on editing thanks to the software’s minimalist design. Advanced animators may want to switch to a different animator because they will need more powerful tools to compete in the industry. It’s a great option for newbies.

Everyone needs to work on their ability to stand out in the crowd, and animation is a great way to do that. Now that you’ve figured out where to start, it’s time to get your career moving. Explore free resources even if you are unsure of which software to use or where to learn.